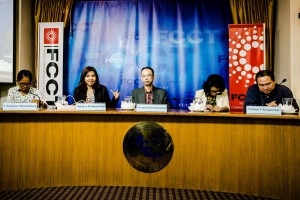 BANGKOK — British labour activist Andy Hall is scheduled to go on trial in Bangkok today to fight charges of defamation for a report he wrote two years ago accusing a Thai food company of mistreating its workers.

Mr. Hall, 34, contributed to a report published by the Finish NGOFinnwatch last January that chronicled a number of labour abuses committed by Natural Fruit Co. Ltd., one of Thailand’s biggest pineapple processors. The factory workers Mr. Hall interviewed, some of whom were undocumented migrants, described hazardous working conditions, unlawfully low wages, and instances of child labour.

Natural Fruit has denied the allegations and launched several cases against Mr. Hall, including charges of criminal defamation, violation of the Computer Crime Act, and demands for 10 million U.S. dollars through a civil suit. If found guilty, Mr. Hall could face up to seven years in prison.

Today’s trial concerns the defamation charges brought against Mr. Hall for an interview he gave to Al-Jazeera about Natural Fruit’s alleged labour abuses. Prosecution witnesses are scheduled to begin their testimony in Bangkok’s Prakanong Court today.

Defamation is a criminal offense in Thailand, defined under Thai law as any statement made by one party that is likely to impair the reputation of another party or expose the latter to hatred. The offense is punishable by up to two years in prison and a fine of 200,000 baht.

The law has been frequently criticised by rights activists, who say it is abused by authorities and large corporations to silence critics and create a climate of fear.

Last month, 100 rights organisations from around the world signed a letterasking the Thai Pineapple Industry Association (TPIA) to urge Natural Fruit to drop the case.

“By refusing to work with civil society and instead launching an aggressive legal battle against Mr. Hall, Natural Fruit is sending a message that it would rather intimidate critics and silence those who advocate on behalf of migrant workers than engage in genuine dialogue about conditions in its factories,” the leader reads.

Earlier this year, two Phuket-based journalists were charged with defamation by the Royal Thai navy for a publishing an excerpt from a Reuters report that alleged Navy officials’ involvement in the trafficking of Rohingya refugees from Myanmar.

In both Mr. Hall’s case and the Phuketwan journalists’ cases, the law is being used to target individuals and not the larger organisations their work is affiliated with. Instead of pursuing charges against Finnwatch, Natural Fruit Co. has targeted Mr. Hall alone. Similarly, the Thai navy has focused their efforts on prosecuting the journalists from Phuketwan, even though the report in question was authored by Reuters.

“This law is used to intimidate people,” said Supinya Klangnarong, a media rights activist who was charged with defamation and for criticizing the Shin Corporation in 2003. “Most of the defamation cases in Thailand are about ‘protecting face.’”

Ms. Supinya, who was eventually acquitted after a highly publicised trial, was referring to a common Thai idiom — ’saving/protecting face’ (rak sa na)—  that describes many Thai people’s concern with protecting their reputation or image. Any act that causes someone to ‘lose face’ (sia na) is considered extremely offensive in Thai culture.