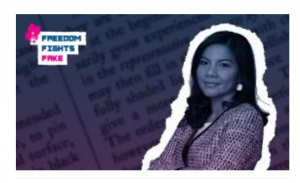 As misinformation permeates the region, prominent media-rights activist Supinya Klangnarong says a concerted effort is needed to fight the rising problem.
Spiked metallic fencing did very little to hold back a rush of about a hundred angry protesters. One by one, the demonstrators inched their way closer to the entrance of Bangkok’s parliament house. It was December 12, 2007, when activists pushed against a military government led by Surayud Chulanont. The activists were protesting the government’s plans to pass undemocratic laws that would dwindle freedom of expression. Amid the crowd, Supinya Klangnarong, a young media rights activist, glanced up at the fencing above. She contemplated the weight of her next move. Within seconds, she threw herself over the fence too.

“And so we climbed in,” Supinya, 44, said with a shrug at a cafe in Bangkok on August 20. “It was all about protecting civil liberties and freedom of expression.” Climbing that fence, in a way, solidified her decision to devote her life to press freedom and liberty, regardless if that meant she’d have to face criminal charges, along with the pain of being stuck in the political center of a deeply divided country.

Almost 13 years later, Supinya is taking her depth of experience advocating for freedom of expression, and using it to fight a war against rising online misinformation.
“In Thailand, we don’t have many trusted media organisations or so-called fact-checking groups on both sides,” she said. “We either have one sided, extreme bias, or total silence,” she added, noting that anti-misinformation efforts need to increase.

But it’s been a long road. Supinya has seen a journey full of difficult moments.

It started in 2003, when she was sued for defamation by former Prime Minister Thaksin Shinawatra’s powerful Shin Corporation. Earlier that year, she joined Campaign for Popular Media Reform (CPMR), a network that brought together dozens of NGOs fighting for a range of human rights and freedoms. The group discovered that the ex-PM’s political career influenced his financial assets spotlighting a glaring conflict of interest.

“So they sued me for defamation,” she said. It was a typical “David and Goliath case,” one that garnered the attention of the world, Supinya explained. “People wanted to know, why did a big company owned by the Prime Minister sue a young activist?“ She faced up to two years in prison, but the charges were later dropped in 2006.
After a short stint as a professor at Mahidol University, she faced criminal charges for “causing unrest to society,” in her role storming parliament house in 2007. She was found guilty, but didn’t have to do jail time. She noted how the current climate of repression is even worse for young activists in the country today. “In Thailand, you have freedom to speak, but you will lose freedom after you speak,” she said about the recent arrests.

She shook off the legal setbacks and joined Thai Netizen Network, an organisation advocating for internet freedom. The group has long campaigned against the nation’s notorious Computer Crime Act, a law viewed by rights groups as “overly broad powers to the government to restrict free speech, enforce surveillance and censorship, and retaliate against activists.”

“We campaigned against the Computer Crime Act for many years, and we worked a lot to defend internet freedom,” she said. But she added that despite the work, the state of freedom of expression is even worse in Thailand today.

Thailand has a long history of political instability. Military led governments backed by the establishment often replace democratically elected governments in a cycle of coups. Mass dissatisfaction has led to perpetual protests that surface in response to the installation of authoritarian regimes. In effect, freedom of expression is repeatedly muzzled. Even now, speaking out against the current military-backed government is particularly precarious amid a new wave of anti-government protests.

Supinya is a woman who firmly believes in destiny. She says her life has moved fluidly from one role to another, in spite of much public criticism.

Before deciding to take on Thailand’s growing problem with misinformation, and overcoming criminal and civil charges, she was voted in by conservative and progressive senators to become the youngest commissioner at Thailand’s National Broadcasting and Telecommunication Commission in October, 2011. The commission was established to oversee and regulate broadcast media across the country.

Supinya felt that as a commissioner, she could finally advocate for press freedom from the top. “I was the only woman, the youngest, and I was the only one who really represented the media and NGOs,” she said.

Since then, Thai political observers have had some difficulty placing Supinya in a political box.

While it’s true that she has historically been affiliated with groups across the political landscape, at the end of the day, she says, her moderate position has made her a more neutral observer. In 2020, public opinion has little to do with her focus on combating disinformation.

“People have a hard time understanding where I stand,” she said. “Often people get confused. If you talk with most people right now, they’d consider me a moderate, or even might call me ‘Salim’,” she added using a new slang for Thailand’s conservative elite.

“Because in the past I joined the PAD [an anti-Thaksin coalition]. But if you talk with the royalists or conservatives, they also question me,” she explained.

“I know some people don’t like me, it’s possible that some people even hate me, but I’ve got a feeling that it’s not too much hate, and that’s a good thing,” she said with a laugh.

Supinya believes that intellectual debate is the only way to spotlight bad ideas. She said that biased fact checking defeats the purpose. She noted that the Thai government has built an “anti fake news center,” but critics say it could be used to clamp down on dissidents. The spreading of misinformation requires more neutral fact checking, something she hopes to accomplish moving forward with her own fact-checking group.

Thailand’s Ministry of Digital Economy and Society recently warned that the problem is worsening, claiming that in August alone, over 3,000 social-media pages and websites have violated cyber laws related to misinformation.

“The issue of fake news has become an issue for every country. So, we have to work on this, but the solution should still be based on the principle of protecting freedom of expression, so that’s why we don’t agree with the state approach,” she said, adding that no one trusts the state-run center.

But the new anti-disinformation group, Cofact, a group Supinya co-founded, hopes to stand as an independent fact-checker ready to grapple with a growing “fake news” problem, she explained. The group has led regional forums discussing how to tackle the issue. She said they found that a collaborative fact-checking effort from the state, civil society, and media, must occur in order to better combat the spread of misinformation. There must be a concerted effort, she said.

For most, it’s difficult to identify information online with total accuracy, Supinya said, but “at the same time we need to watch out for the dark side of the online world, fake news, disinformation, hate speech and aggression,” she said.

“We need to instill values of freedom of expression, but at the same time we also need to build up our own digital intelligence and empathy.” 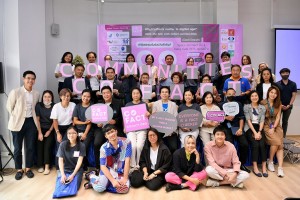 FNF works with Cofact in the conduct of its activities, and supports the development its fact-checking app.